The importance of acting quickly when new unfavorable search results appear in Google.

Unfortunately, there are many high-ranking websites that allow unsubstantiated complaints and defamatory postings to be made public, without any verification of the veracity of the claims. Consequently, innocent people and businesses can be severely tarnished, and damage financially by these unsubstantiated claims of wrongdoing.

The injury is then exacerbated by Google because it’s search algorithms allow the new negative content to enjoy a rapid, unchallenged rise through the search results for the victim’s business name, often appearing overnight on the first page of Google, and then steadily rising to first or second place. This is demonstrated in the image below. 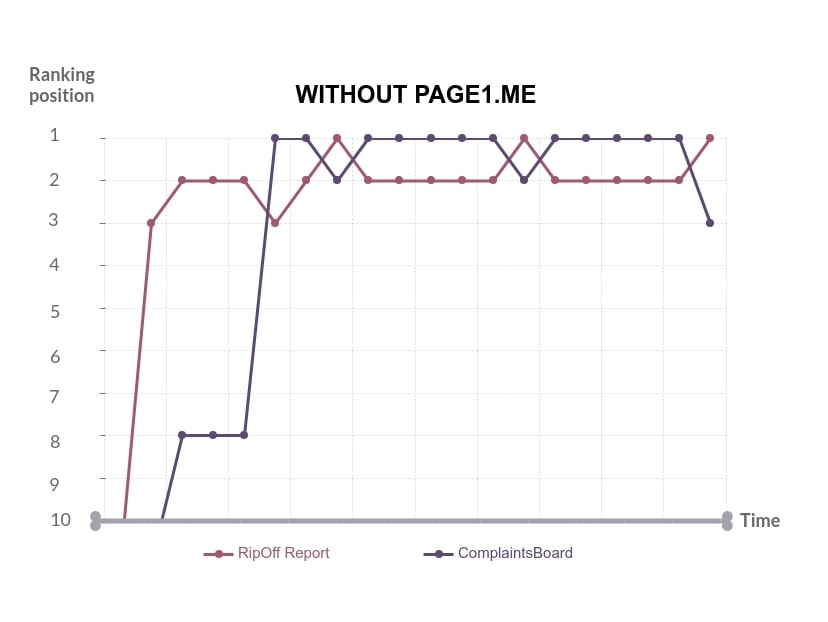 High-ranking websites such as .gov government publications, RipOffReport.com a ComplaintsBoard.com and other well-established websites are almost guaranteed to cause the types of problems described above. It is imperative that you engage page1.me as early as possible so that we can begin to push back against the steep upward trajectory that would otherwise occur (top image) this is. Our team is cautious in managing client expectations. You need to understand that in cases like this, even when we begin to push back because there is a rapid rise in the unfavorable results, we first need to slow down the velocity before we can begin pushing the negatives back down in ranking. And hopefully off the first page. This is what we mean by “it can get worse before it gets better”. 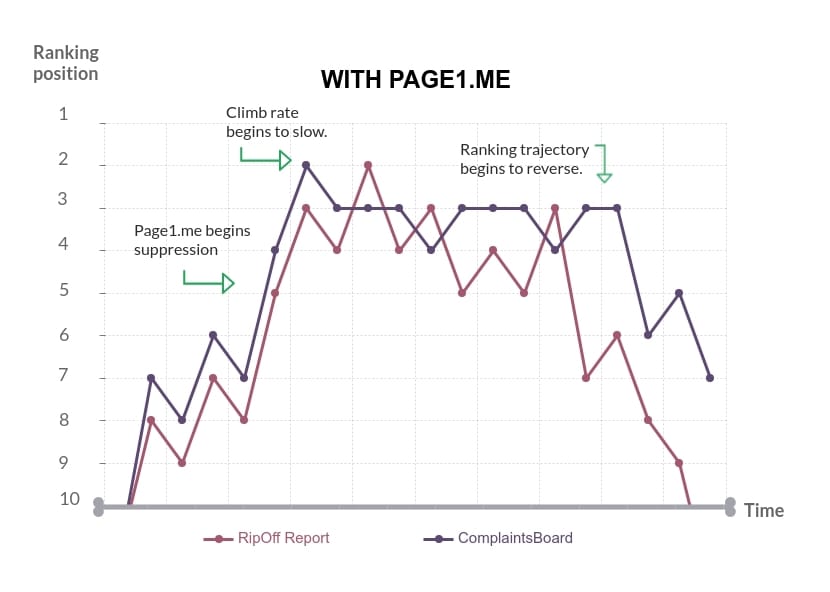 When you know it is getting better

We will work intensively on your behalf when you’re faced with these types of reputation assaults. After the targeted negative search result stabilize at the apex of the climb, you will begin to see some wavering in their strength, and by day as you observe our work on the page1.me dashboard, you might see some up-and-down changes, until eventually a gradual decline in ranking will begin. Patience is the key, sometimes we can effect good corrective results quite quickly, within just a few weeks, but in some cases it may take months.

There is one more factor that needs to be kept in mind. Sometimes, a rapid rise or spike in ranking can occur, even for old results that have not previously appeared high in Google search. This happens when Google makes a manual adjustment to the ranking for any given website. Essentially, attributing higher authority to a domain arbitrarily, usually after a real human in Google makes an assessment and judgment call. We have seen this happen with many websites over the years. The results will manifest either as a rapid upward spike in ranking, or go the other way, where traditionally high-ranking, negative search results will drop, sometimes as much as 20 or more positions; literally overnight.

Although we would like to take the credit for causing rapid overnight drops like this, we can’t; it is all Google. In the same manner, when there is an overnight spike in ranking, it is likely for the same reason.