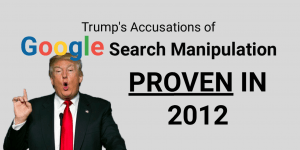 Michael uncovered that Google appeared to hold search result positions 3 & 4 on page 1, and # 11 on page 2, for content that damaged the target of the search.
After Roberts shared his discoveries about Google search manipulation, Google appeared to change its algorithm so that the embarrassing results were spread more randomly in the first and second pages of search results, but still seemed to enjoy artificially elevated positioning.

Rexxfield’s 2012 video details the hypothesis of Google search manipulation, and how Google earns financially by libeling third parties whilst continuing to be immune from liability due to US legislation Section 230C of the Communications Decency Act.

How US Congress can Repair Online Defamation

Following Michael’s findings about Google search manipulation, he later posted a video with his suggestions to the US Congress for amendments to the 1996 law that provides Google protection for defamation, titled “Section 230C of the Communications Decency Act”:

Michael’s team has posted articles and Do It Yourself pointers, on Defamation911.org, for minimizing the damage Google does to you thru defamation.

Who is Michael Roberts

As a Private Investigator, Michael has located or positively identified many anonymous internet bullies. He also located a murder fugitive for the US Marshals following a 2-month manhunt. His bio and case studies are available here. Michael’s team at Page1.me offers professional assistance in suppressing harmful and defamatory content in Google search results.

Michael also supplies Investigative Journalistic Support for internet and other electronic correspondences related cases, should your team have need.