How to Fight Yelp Negative Reviews

Ways to remove a Yelp Review or Suppress through Positive reviews

We discussed how the Yelp Filter works and why your good reviews are hidden in the “not currently recommended” category. But now it’s time to tell you how to fight Yelp negative reviews. Because in your case, there are certainly options to get Yelp reviews to work in your favor!

For most people, the most frustrating part is the 5-star reviews being stuck in the “not currently recommended” category. Even though this doesn’t affect the overall score, it does make them ‘invisible’. But, what goes in the filter can be brought back!

One of the key factors of the Yelp Filter is reviews being filtered based on their profile activity. As Yelp states in their Yelp Filter explanation video:

“Every Yelp review is automatically evaluated by Yelp’s recommendation software based on quality, reliability, and user activity on Yelp. More often than not, those useful reviews come from active members of the Yelp community.”

With this knowledge, you can start creating your strategy to fight Yelp negative reviews. If you know who is behind the 5-star rating review, that is currently hidden, contact them. Let them know you appreciate their review but that it’s hidden because of their inactivity on Yelp. If they like you, they might bump up their Yelp activity.

Additionally, you and friends/employees can befriend them on Yelp and rate their reviews as useful and cool.

If you have happy, satisfied customers, ask them to leave a Yelp review. Even though Yelp tells you not to ask for reviews, they told MarketingLand that asking customers for Yelp reviews is “not in violation of their Terms of Service.” Unless you pay people to write a review.

If someone is willing to write a review but hasn’t been active on Yelp, it’s very likely their review ends up in the Yelp Filter. To prevent this, get people to first review a local donut (or any other) company. A few days later, let them review your company. And again, a few days later have them review another local company to show Yelp their profile activity and relevance.

#3. Flag and ask Yelp to Review the Review

If you are dealing with a defaming review, which you believe to be in violation of Yelp’s Content Guidelines, you can flag the review. By flagging a review, you ask Yelp to review and remove that specific review. 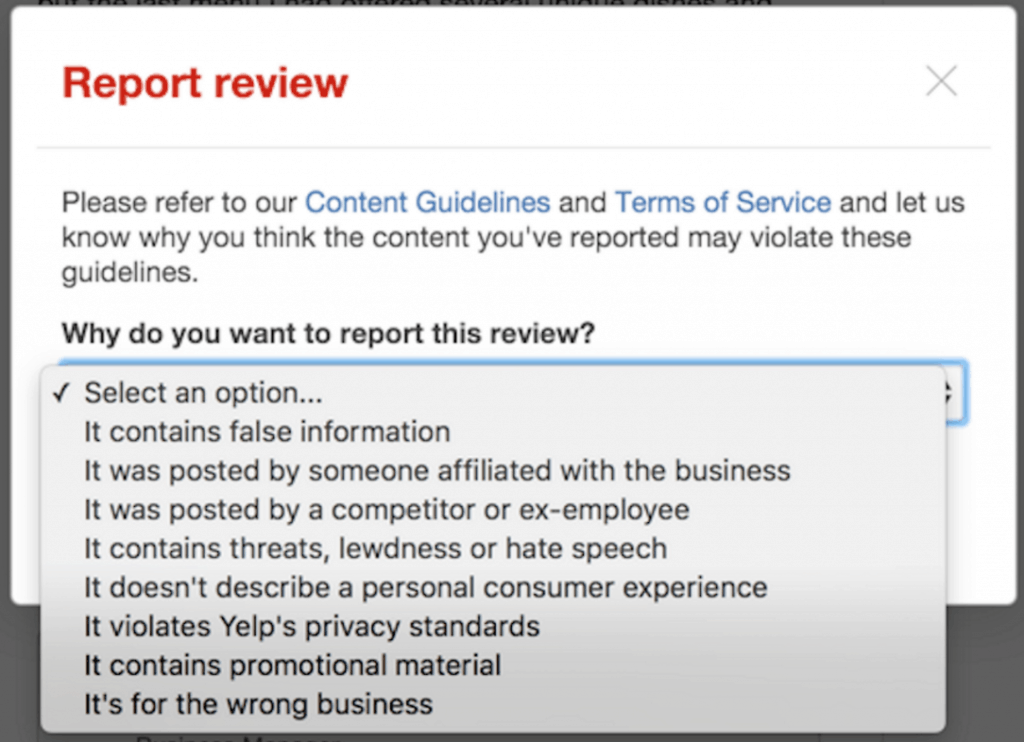 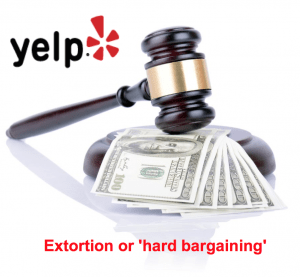 Yelp has been sued by many over the last years because of extortion, but all lost. Business owners claimed that their positive reviews were hidden but their problems would be solved by Yelp if they paid Yelp’s advertising fees. Unfortunately, the judge stated that Yelp tactics are ‘at most, hard bargaining’ and not extortion.

“The business owners may deem the posting or order of user reviews as a threat of economic harm, but it is not unlawful for Yelp to post and sequence the reviews,” Judge Marsha Berzon wrote for the three-judge panel. “As Yelp has the right to charge for legitimate advertising services, the threat of economic harm that Yelp leveraged is, at most, hard bargaining.”
– Source: www.mercurynews.com

Paying Yelp’s advertising fees might help in your situation, this choice is entirely up to you.

If you do have a budget but do not want to pay the extortion, there is another option: suppressing the entire Yelp search result in Google. If it’s not visible, it might as well not be there.

You can also find free DIY Yelp guides on defamation911.org that can help you to suppress Yelp yourself.

If Yelp reviews are not something you can ignore, start developing a Yelp strategy. Depending on your case, decide which of the above options suits your situation the best and just start. If one doesn’t work, try the other. Whatever you do, do it legal and in accordance with Yelp’s guidelines, or you might end up in more trouble.