This ComplaintBoard Case Study tells the story about an individual who invested many years of work and considerable finances into building his brand equity. A jealous competitor posted malicious and false allegations and bogus customer reviews in an attempt to repulse prospective customers from engaging with our client. 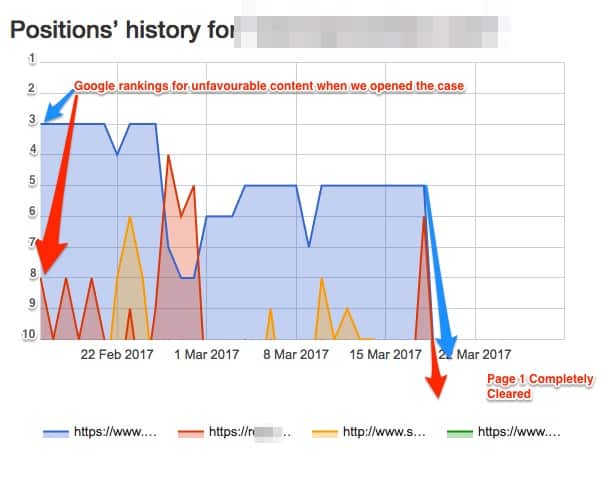 When we took the case, the first page of Google had two very conspicuous and damaging search results on display. Two additional problem results were ranking high on the second page of Google. Because these were recently posted complaints, they were demonstrating an “upward trajectory” in Google search. As such, the page1.me team had to first slow down the rapid increase in ranking before we could push them back down again. The highest ranking problem result ( represented as a blue line) was in position three. We were able to keep it there for a week or two, before we started seeing a significant drop in ranking. Whereas, the red line represents a negative result that was in position 8 on Google initially, but continued to climb because of the aforementioned vertical trajectory. Once again, our team was able to regain control over the destructive path and climb of the result, and then cause it to rapidly reverse its course until it was completely removed from Google’s first page. You will notice that two weeks later there was an overnight spike of the red result, this can be expected when cases are young. We call this the ” dancing with Google”. This ‘dance’ continued with the remaining results until these were removed from the first page as well.

In just a month all negative search results were removed from the first page of Google. Our client was so pleased with the results, that he initiated a second case for a different search term that was related to his business. The results speak for themselves in the following image: 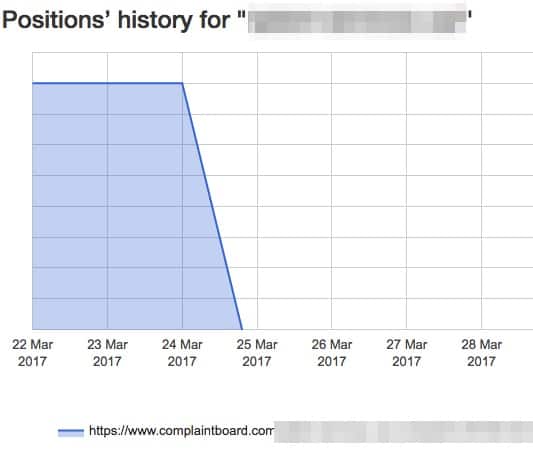