Here are a online suppression case studies of how we successfully repaired the online reputation of Page1 clients.

Note: The illustrative examples provided in this article are of similar people and entities in order to protect the identity of our client.

Our client was in the processing of buying a website but changed his mind. The site owner started blackmailing our client and warned that if our client did not pay, the owner would put him and his business on RipOff Report. Not willing to give into extortion, our client’s business was defamed and slandered on the internet as a result. When people did their online research on our client’s business, the RipOff Report would be seen on the first page of Google. This caused damage to his reputation which resulted in loss in clients and revenue. He hired Page1.me to remove RipOff Report as soon as possible. 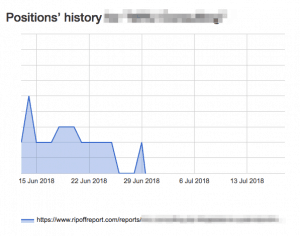 Our team began working on the case on June 13, and by end of the month, we were able to push down the result to the second page of Google. Since June 29, the first page of Google has remained clear of the RipOff Report article.

When we began our work, the RipOff Report initially increased in ranking and moved to position 7. We see this quite regularly, in some cases it get’s worse before it get’s better. After a few days, the article danced up and down in ranking, before completely being suppressed far into page 2 of Google.

Within 2 to 3 weeks, we achieved the removal of RipOff Report from page 1 of Google.

NOTE: These case results are not a standard. Sometimes we get good corrective results within a few weeks, but in some cases, it may take months. Patience is the key. 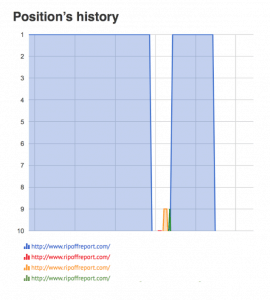 One of our online suppression case studies involves an entrepreneur, struggling with catastrophic damages as a consequence of false and malicious allegations that had been posted on the notorious website RipOffReport.com. One particular complaint page was consistently appearing in at the top of page 1 for Google search results for the individual’s name. There were three additional reviews which ranked on page 2, though occasionally jumping up to the first page. An objective review of the allegations, would lead any educated person to conclude they were false because the alleged facts simply did not stack up. Notwithstanding, the client was still struggling to hold existing clients, and gain new clients due to prominent positioning of the outrageous allegations.

Page1.me began working on the case on 6 December, and by mid-January we were able to push the result down to the second page of Google. In response, the RipoffReport administrators made some changes to the page in order to optimize it once again, but page1.me defeated those efforts within two weeks. Since early February 2016, the first page of Google for this particular client has been completely clear of the damaging results, with the most damaging pages pushed far beyond the third page of Google.

RipOffReport pushed to the second page on Google within 5 weeks 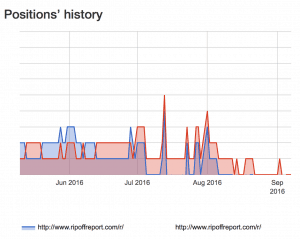 Another one of our Online Suppression Case studies is about RipOff Report. Our client had been passionate about real estate investment strategy since the 1980s. As a poor student with no savings, he was mentored by an experienced investor. In the 25 years since, this client has risen to become an in-demand public speaker for the real estate investment industry.

Unfortunately, a participant in one of his speaking engagements did not have the patience to apply the wisdom imparted by our client. Mistakes were made due to his impatience, and rather than taking responsibility for his actions, the student blamed the teacher. RipOffReport.com was the attack platform of choice for this vindictive individual.

The left-hand side of this timeline graph depicts where the two bogus Ripoff Report reviews were ranking when we took the case in June 2016. As you follow the graph to the right, you can see the downward progression over three months.

Page1.me completely eradicated these damaging results from the first page of Google search results within 3 months.

According to Google statistics, this achievement resulted in an 94% reduction* of exposure to the report result for people searching for this individual. 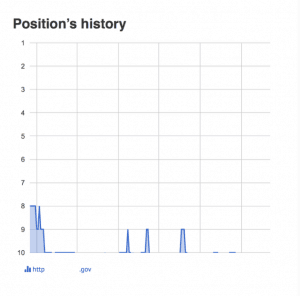 Unfavourable search results appearing on government websites (.gov) can be very difficult to shift. This is because Google gives very high authority to education and government institutions. Because Google snippets randomly choose only two lines of text, it can make an innocent third-party who was mentioned in the case, appear as the actual offender in the disciplinary action.

In this online suppression case study, the client had contended problems for several years, caused by search results on the US Securities and Exchange Commission website. He had hired many search engine optimisation agencies to try and resolve the issue, but to no avail. Traditional SEO had been able to move the unfavourable result from position 2, down to position 8, but it seemed to be super glued in this position.

Page1.me was able to completely sanitise the first page of Google within three weeks, with the occasional spike thereafter. But from late January 2016 onwards, the targeted search result has been well and truly relegated to the “Google ghettos” (in other words ranking very low)

Click here for a case study about an online extortion scheme against Physicians.